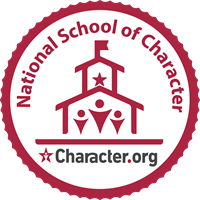 DBO is the proud to announce that it has been named a National School of Character!

WHAT IS A NATIONAL SCHOOL OF CHARACTER?

“We are pleased to announce and celebrate the schools and school districts who have earned this national recognition,” said Dr. Arthur Schwartz, President of Character.org, the national organization that certifies National Schools of Character. “Each of these schools and school districts has put in place a comprehensive approach to help their students understand, care about, and consistently practice the core values that will enable them to flourish in school, in
relationships, in the workplace, and as citizens.”
This year, Dennis B. O’Brien joins 83 schools and 7 districts in 15 states that have earned the prestigious designation, National School of Character, following a rigorous examination process. “These schools and school districts serve as an exemplary model for all schools and districts across the nation,” adds Lori Soifer, who directs the Schools of Character program. “The educators at these schools are inspiring their students to treat all people with respect and dignity. They are teaching their students to be honest and trustworthy, to contribute their time and talents to the common good, and when necessary, to show the courage to stand
up for what is right.”

The character initiative of Dennis B. O’Brien has grown in many ways since it took its first steps in 2013 when Christopher Marangon took over as principal. With his first goal of improving morale, Mr. Marangon listened to parents, staff and the community to build trust. A school competition chose our mascot, Buzzy the Bee, and, when the principal donned the mascot suit, enthusiasm was high. In the following year, PBSIS was introduced; an intentional monthly character focus took place; professional development began to center on ways of giving praise and catching kids being good, After a year, we took a survey and realized from the feedback that each grade had specific needs, so we revised the “one-size fits all” character approach so that each grade had its own personality. We also gave each grade a color and tied it all together under our Rainbow theme. In 2018. the district, seeing the effect of character on student performance and behavior, adopted H.E.A.R.T. as our district’s core values (all stakeholders were involved and voted; O’Brien was on the Central Committee and continues to be). We stressed EFFORT as the performance value that was needed to keep the H.E.A.R.T.  functioning. The result: we are now all on the same page—our core values are everywhere, and the students and faculty live our core values. After earning Honorable Mention distinction from Character.org, we have addressed the Areas of Growth, and are now delighted to be a National School of Character.

DENNIS B. O’BRIEN IS ALSO A 2020 NEW JERSEY SCHOOL OF CHARACTER
The first step in becoming certified as a National School of Character is being recognized as a New Jersey School of Character. Our school underwent a rigorous application process in which we demonstrated how we addressed each one of the Eleven Principles of Effective
Character Education, the proven framework for developing a School of Character.

Since its inception, the National Schools of Character program has impacted nearly 3 million students, staff, parents, and community members. The schools and school districts who apply must meet the rigorous standards articulated in Character.org’s 11 Principles Framework for Schools. Each school is evaluated by a team of trained educators and includes a site visit to assess how a school’s “shared values” are motivating students to do the right thing.